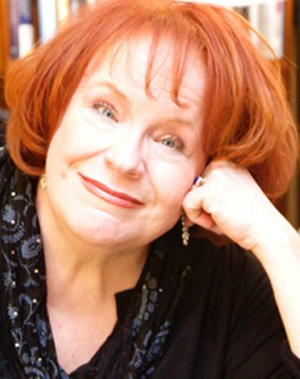 KATHY aka “BABE” ROBINSON is a native Philadelphian, a former cast member of “Saturday Night Dead,” starred as “Mrs. Cherrywinkle” for PBS/Kids-TV, and is an accomplished actress in National, Off-B’way, & Regional theaters. She has also made a fulfilling and memorable living in the Cabaret/Club circuit.

Babe has worked half her life (don’t do the math, that’s between 40 and death!), entertaining audiences from Manhattan, Boston, Key West, St. Thomas, to Mykonos, Greece with her signature mix of Standards, Jazz, soulful ballads and high energy performances of everything from Rock to Contemporary.

Her percussive contributions bring new meaning to “Catholic Rhythm!” Current CDs include: “BOTH SIDES NOW” with BOBBY PEACO & DAVID DYER is an eclectic mix of Theater, Cabaret, and Pop, recorded in both NYC and Mykons Greece (hence the title!). “PIANO BARRED” with BOBBY PEACO is a collection of her Piano Bar favorites with her longtime friend and partner in crime…

Both CDs are available @ all of her appearances (she’s probably got a few in her purse too!).